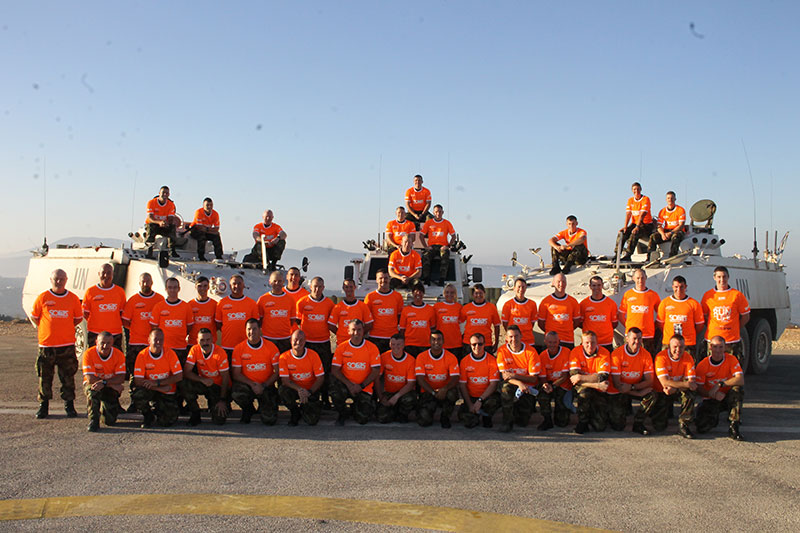 The 2016 Solas Cancer Support Centre “Run and Walk for Life” may have taken place n Sunday 9th October but the fundraising, for this year, has taken on a truly International feel. Over one hundred Irish Defence Force members ran on Friday 14th October in aid of the Solas Cancer Support Centre. The Defence Force staff members are part of the deployed 53rd Infantry Group, #53InfGp, to South Lebanon under the United Nations Interim Force (UNIFIL), looking after peacekeeping in the region.

The Irish Defence Forces currently have 186 personnel serving with the 53rd Infantry Group who are drawn from the 1 Bde, 2 Bde, DFTC, Air Corps and Naval Service. Together with a contingent from Finland and Estonian, they form 116 FINIRISHBATT based at UNP 2-45 in UNIFIL Sector West. Commanded by Lieutenant Stephen Ryan this tour of duty began in May and will end in November. The unit is primarily drawn from James Stephens Barrack in Kilkenny.

Private Tommy Carew, Ferrybank, contacted RFL Committee member Lena Murphy, during the summer. Tommy’s Aunty was diagnosed with Breast Cancer, over two years ago, and availed of the Solas Cancer Support Centre services. A good recovery was made thanks, in part, to the assistance provided at the Centre.
Having made contact with Lena Murphy the RFL Committee agreed, unanimously, that if logistically possible a “Run for Life in South Lebanon” would be an ideal way to spread the message further. No time was wasted in sending t-shirts out to the base and, thanks to Tommy and Lieutenant Kevin Lanigan, clearance was given for a run to take place on Friday 14th October.

The run itself was centred round the main based, situated in South Lebanon, east of a small village called At Tiri. All of the Defence Force members who competed in the “Run for Life in South Lebanon” were delighted to be taking part and helping to raise awareness of the Solas Cancer Support Centres services.

Michael Garland, Chair of the 2017 “Run and Walk for Life” commented, “This was a great initiative from Private Tommy Carew and Lena Murphy, who works with our media sponsor Beat, to put this project together. To see the photographs of so many of our Defence Forces taking time out from their peacekeeping duties to “Run for Life” was just amazing. It is something that we can perhaps build on in futures years. This in turn will help the Solas Cancer Support Centre broaden the communication network of the very important work and services provided here in Waterford City and now also in Dungarvan.”